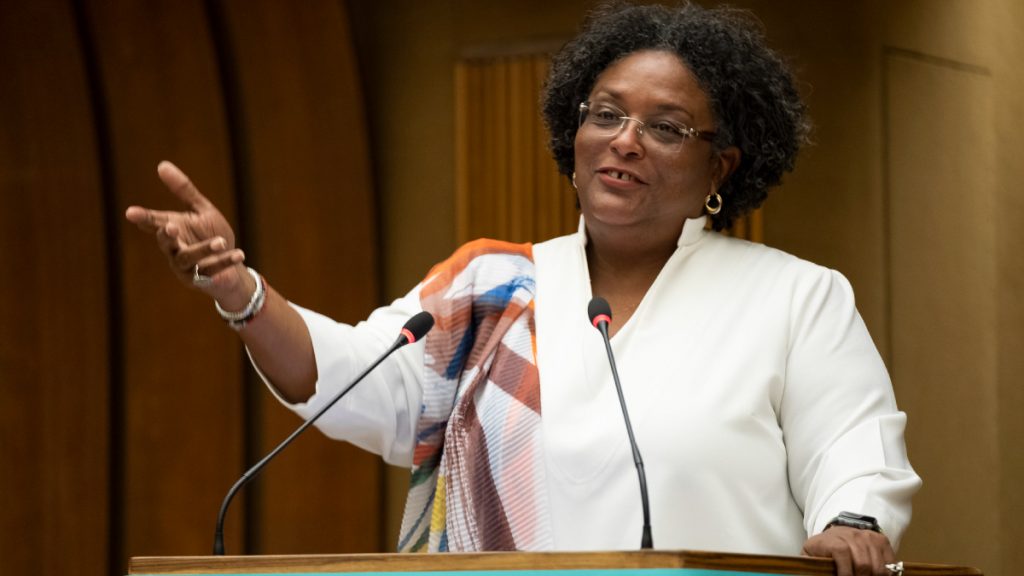 The global financial architecture must be reconfigured completely to reflect the needs and participation of countries in the Global South, many of which were under the yoke of colonialism at the time the current order was fashioned, said Prime Minister Mia Amor Mottley of Barbados,  keynote speaker of the Sixth Annual Babacar Ndiaye Lecture, held on the sidelines of the World Bank-IMF Annual Meetings.

The Sixth Annual Babacar Ndiaye Lecture, an initiative of the African Export-Import Bank (Afreximbank), was held on the 14th October  in Washington, DC, USA, after two years of virtual Lectures. The theme for this year’s event was“The Developing World in a Turbulent Global Financial Architecture”.

Afreximbank has hosted this Lecture every year since 2017 in honor of the late Dr Babacar Ndiaye, the fifth President of the African Development Bank. Dr Ndiaye transformed the Bank during his decade-long leadership and was also instrumental in establishing several other enduring Pan-African institutions including, among others, Afreximbank, Shelter Afrique, and the African Business Roundtable.

This year’s lecture was organized at a time of heightening geopolitical tensions, with the weaponization of the US dollar exacerbating the risks of global fragmentation. Simultaneously, the cycle of aggressive interest rate increases by systemically important central banks in response to surging inflation has aggravated macroeconomic management challenges, dramatically increasing debt-servicing costs and raising the specter of a debt crisis in the Global South.

Keynote speaker, Prime Minister  of Barbados, Mia Mottley said the current system operates to the disadvantage of Caribbean and African nations, whose unique circumstances are not accounted for in the decision-making of major financial institutions, but which are nevertheless affected drastically by those decisions. Recalling the genesis of the Bretton Woods institutions, she said they were designed at a time when “we were not seen, we were not heard, and we were not felt.” These structures must be reoriented as a matter of fairness and to reflect the growing role that countries in the Global South play in the world economy, she said.

Prime Minister Mottley outlined a set of recommendations for reforming the existing international financial system to better reflect the challenges of our time while concurrently creating the conditions for a process of globalization that serves us all. Among the various recommendations she articulated, the most pertinent include:

(i) Reforming the United Nations Security Council, especially its panel of Permanent Members, which currently lacks representation for more than 1.5 billion people of African descent; (ii) Democratizing the system of global governance, particularly the G7 and G20, by broadening representation to include the African Union as a full member; (iii) Reallocating unused special drawing rights (SDRs) issued by the IMF to assuage liquidity constraints in the Global South; (iii) Developing new facilities for food and agriculture, clean energy, and climate change adaptation in response to emerging global challenges; (iv) Reforming global credit rating agencies to correct their intrinsic biases, which over the years have led global investors to overprice risks in the Global South, with significant consequences for access to development finance, debt sustainability, and economic growth. She took one example, Ghana’s Eurobond yield which currently exceeds 25%, while Greece pays less than 2% for new issuances. (v) Suspending temporary surcharges by the IMF. (vi) Taking advantage of the Review of Quotas by the IMF scheduled for 2023 to reform the Bretton Woods institutions and account for shifting economic weights. The Prime Minister deplored the fact that 27 low-income countries, with a population of 611 million, have fewer quotas combined than the United Kingdom, with a population of only 67 million, does alone; (vii) Reforming the Bretton Woods institutions and holding them accountable to their mandate, specifically that of development and not just crisis management and structural adjustment.

The Prime Minister reminded the audience that what we now call the World Bank Group began life simply enough as the International Bank for Reconstruction and Development. She stressed that its eponymous mandate, which was so effective during the reconstruction of Europe after the second world war, has been noticeably less pronounced in respect of promoting development in the Global South, where poverty is rampant and unemployment rates have been at Great Depression-levels for decades.

Prime Minister Mottley emphasized the need to adopt a sense of urgency, arguing that the devastating effects of global warming, especially in countries on the frontline of the climate crisis, as well as ongoing energy and food crises demand bolder and swifter steps. “Urgent and ambitious action is necessary to save lives and livelihoods,” she said.

Professor Benedict Oramah, President and Chairman of the Board of Directors of Afreximbank, celebrated the enduring legacy and vision of Dr Ndiaye and called for “renewed efforts to reconnect Africa and the Caribbean through trade and investment in pursuit of the shared purpose of economic emancipation”.

President Oramah praised Prime Minister Mottley for her global leadership in the pursuit of fairness and equality. He referred to their shared belief that “African and Caribbean nations can turn the iniquities of history into platforms for economic prosperity today and in the future. Realizing that vision can only begin with the reconnection of the Caribbean people to their genealogical ties in Africa through trade and investment.”

The Babacar Ndiaye Lectures are held annually on the sidelines of the World Bank meetings.