Dr. Alya’a Samir Borhan: “Egypt is looking forward to receiving support from Mauritius on the crucial issue of the Grand Renaissance Dam” 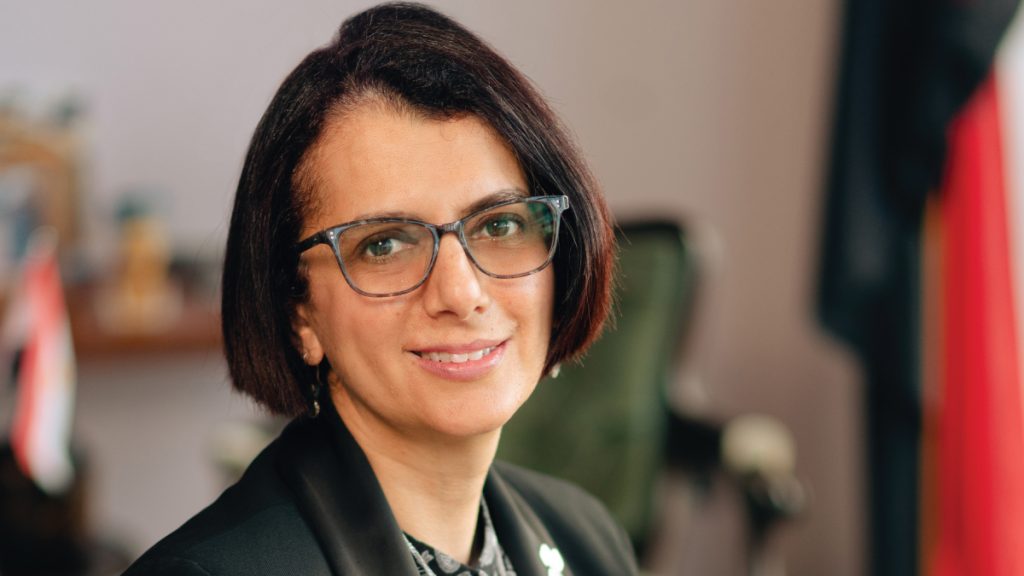 Dr Alya’a Samir Borhan, Ambassador of the Arab Republic of Egypt to Mauritius spoke to Investor’s Mag on the state of bilateral relations between the two countries. She elaborated on the many investment opportunities present in Egypt and explains how in Mauritius, she is strengthening and promoting the “existing cordial excellent bilateral relations between the two countries”.

Both countries exchange support for the candidatures of the other country in regional and international organisations and often broker Exchange of Support Deals. Egypt supports Mauritius sovereignty over Chagos and is relying on Mauritius to understand Egypt’s position vis à vis the critical issue of the Grand Renaissance Damn (GERD), which poses an existential threat to the lives of 100 million Egyptians, who could go thirsty and lose the ability to properly water their crops. Subsequently, Egypt is looking forward to receiving Mauritius’s support on this crucial issue.

Egypt and Mauritius enjoy duty-free access of each country’s products into the other’s market due to the membership of both countries in COMESA. Moreover, Egyptian products can use Mauritius as a gateway into the markets of the COMESA and SADC countries, as well as benefit from Mauritius’s various FTAs with China, India and EU, which have given Mauritian products and goods processed in Mauritius preferential status in these markets; this of course as long as the rules of origin issues are properly addressed and taken into consideration.

Both countries can exchange their expertise in the field of Tourism, especially eco-tourism, textile industry, financial services, ICT and Sugar Cane processing.

Several important bilateral treaties were also signed. The most important one : a Treaty for the Prevention of Double Taxation and Tax Evasion during 2014 as well as a Memorandum of Understanding (MOU) for the promotion and protection of mutual Investment in 2012.

Both countries are currently working on signing MOUs in the field of Environment, Chambers of Commerce in both countries, Agriculture, Energy, Fisheries/Aqua Farming, Education, Financial Services and Dual Listing of the shares of the companies on the Stock Market of the other country, Diplomacy and Diplomatic training , Waiver of Visas regarding Diplomatic , Official and Special Passports.

Mauritius has seconded its Embassy by one officer and the Egyptian Embassy in Mauritius is hoping to enjoy the same advantage, which will undoubtedly further promote the existing cordial excellent bilateral relations between the two countries.

What is being done to increase cooperation between the two countries?

I have met all the honourable Ministers and influential officials and the business community here in Mauritius to promote the means and ways we can develop bilateral relations and take them to new heights. I am working on reinvigorating the institutional framework represented by the Joint High Commission or the Joint Political Consultation Mechanism, which has not been convened since 2007.

I have already held a webinar about the pharmaceutical industry and participated in another one about promoting trade opportunities between our countries held in collaboration between EDB and the Egyptian African Businessmen’s Association (EABA). I also recently held a Trade event on the 30th of March 2022 which showcased the Egyptian industrial base and potential Egyptian exports to Mauritius and prospective Egyptian imports from Mauritius and I intend to hold other similar events in the future. This is with a view to benefit from the advantages of both countries’ membership in COMESA, which will bring about the entry of more Egyptian goods into the Mauritian market and get Egyptian companies to import more products from Mauritius.

To improve capacity building, an event organised on the 13th of May 2022 focused on linking Egypt with the Mauritian Alumni of the Egyptian Universities and Training Programmes offered by Egyptian Entities like: the Egyptian Partnership for Development Agency so that the capacity building opportunities can be fully utilised. Moreover, there is on-going cooperation in this field between our Universities like: the two MOUs that are being negotiated between the University of Mauritius and both Cairo University and Tanta University separately.

I intend to hold another event about the Tourism Sector; the promotion of Egypt as a diverse Tourism destination in Mauritius and vice versa.

There are also plans to hold another event about the potential investment opportunities that can be explored between both countries. I hope that when the COVID Pandemic situation improves, more Trade/Investment Missions from Egypt, headed by top ranking officials and composed of Egyptian businessmen, can come to Mauritius and discuss potential joint venture projects in the field of Tourism, Agro-industry , Blue Economy and Culture. The Embassy held an event that revolved around organising a competition amongst the Mauritian schools from the Primary until the Secondary level; entitled “ Egypt in the Eyes of Mauritian kids”, whereby the Embassy received more than 300 Entries of Paintings and Essays from schools from all over Mauritius. This competition helped the students learn a lot about Egyptian history, culture, art and contemporary affairs. I also am one of the patrons of a cultural Egyptian/Mauritian Folkloric Dance Troupe called Kapav composed of dancers from the ages of 13 until 20 years. This dance troupe, who regularly performs in all the events held in the Embassy helped spread awareness about Egyptian culture, music and dance as they perform in Egyptian costumes and dance to Egyptian-inspired choreography playing Egyptian music. The role of this troupe came at an especially critical time, when due to the COVID 19 Pandemic no Egyptian Folkloric troupe was able to travel from Egypt to perform in Mauritius.

Egypt is one of the most important trade partners of Mauritius within COMESA, whereby Mauritius imports 40% of its annual needs of fruits and vegetables from Egypt. How can Egypt help Mauritius to be more autonomous in agriculture?

Egypt can offer more training programmes in the field of agriculture, animal husbandry, aquaculture, agricultural techniques, and irrigation techniques that are usually offered by the Egyptian Ministry of Agriculture and Land Reclamation or the Egyptian Partnership for Development Agency and other important entities in Egypt. Egypt is also currently exporting fertilisers to Mauritius, which are essential for encouraging Mauritius to grow more of its food crops so that it can be less dependent on imports.

What are the other areas of cooperation for the mutual benefit of both countries?

Hopefully, after the improvement of the COVID 19 situation, many more Mauritian students can embark on studying in Egypt and benefit from Egypt’s National Campaign “Study in Egypt”, because Egypt has a strong reputation as a Education Tourism Destination. Egypt currently offers 20 scholarships: 7 undergraduate and 3 post-graduate degrees offered within the Government to Government Cooperation Framework, 5 scholarships offered by the Egyptian Ministry of Foreign Affairs and 5 offered by Al Azhar El sharief.

With the Dual Tourism Destination Packages, European Tourists get a dual destination package where they spend part of their holiday in Egypt engaging in cultural tourism, religious tourism or safari tourism, whilst the rest of their holidays they spend in Mauritius doing beach, water sports and nature tourism. It is important to establish good cooperation between the travel agencies and hotel chains that have Hotels/ Resorts in both countries, as well as have a direct air connectivity between the two countries, which gives rise to the introduction of charter flights to overcome the lack of direct commercial flights between both countries. Moreover, there is a lot of room for cooperation in the field of eco-tourism, where countries can exchange best practices in this field.

I am also hoping that more Egyptian infrastructure companies can participate in the tenders pertaining to the on-going overhaul and modernisation of Mauritius’s infrastructure network, as well as encourage Mauritian companies to invest in the various Mega infrastructure projects burgeoning in Egypt.

I would also highlight the importance of setting up joint projects that allow the sharing of origin so that the value chain of various products can be completed across both countries; whether in the pharmaceutical industry, or ready made garment industry, shoe/leather products industry, vegetable oil refinery sector, processed Food Industry.

Both Egypt and Mauritius can exchange best practices in the field of financial services which is a booming sector. This is why both countries are currently negotiating signing an MOU.

What is the Friends of Egypt initiative?

It is actually called the Egyptian- Mauritian Friendship Group. The event on the 13th of May was held within the context of the Egyptian-Mauritian Friendship Group. The first event in the series was held on the 30th of March 2022 and it was focussing on Trade opportunities existing between both countries and showcased Egyptian Products via the holding of an Egyptian Products Exhibition and the screening of a promotional video about Egyptian Products. The trade dimension of this group will form the nucleus of the Egyptian – Mauritian Business Council, which falls under the mandate of the Trade Subcommittee of the Egyptian -Mauritian Bilateral Relations High Commission. The 2nd event in the series will be held for the Mauritian Alumni of Egyptian Universities and Training Programmes. It is a networking event, where these cadres will meet and exchange experiences and give feedback about their previous courses of study. The cadres will discuss the pros and cons and how they can be improved. A briefing about ‘Study in Egypt’ initiative will be also highlighted as Egypt is promoting itself as an Education Tourism Destination.

What are the various investment opportunities in Egypt?

I will start with the industrial sector: The Egyptian Government is focussing on the industrial sector because it is playing a major role in driving growth rates upward, developing exports and providing industrial investment opportunities. Therefore, many cities and giant development projects have been established, and the most important of these projects are: The Rubiki City for Leather on more than 500 acres, The Furniture City in Damietta on an area close to 331 acres, The Merghem Plastic Industries Complex on an area of ​​approximately 500 acres (in two phases), The giant industrial city of Sadat dedicated to the textile industry on an area of ​​3 million square metres and with investments of 7 billion dollars and the new city of Kom Oshim on an area of ​​7800 acres, which is the largest in the region.

On the infrastructural projects front, like the New Administrative Capital Suez Canal Area, a series of complicated highways, bridges, flyovers have been constructed in order to overhaul Egypt’s road infrastructure. This is with a view to achieve better inter-connectivity and alleviate the severe traffic congestion that has been plaguing Egypt for many decades.

The other investment opportunities comprise the building of new museums like the Museum of Civilisations and the Grand Egyptian Museum. There is also a need to invest in the agricultural sector especially in Land Reclamation from the desert so that Egypt can be self-sufficient in its food needs and be less reliant on imports.

There are also opportunities for investment in the tourism Sector, especially in aqua tourism and new resorts like Al Galala City or the New Alemeen City.

In addition, there is also scope for investment in renewable energy especially solar energy and wind farming projects, in aquaculture and fish farming projects to upgrade the diet of Egyptians and make fish a staple food on their dining room tables.