The liquidation of the BAI Group… revisited by Harry Booluck 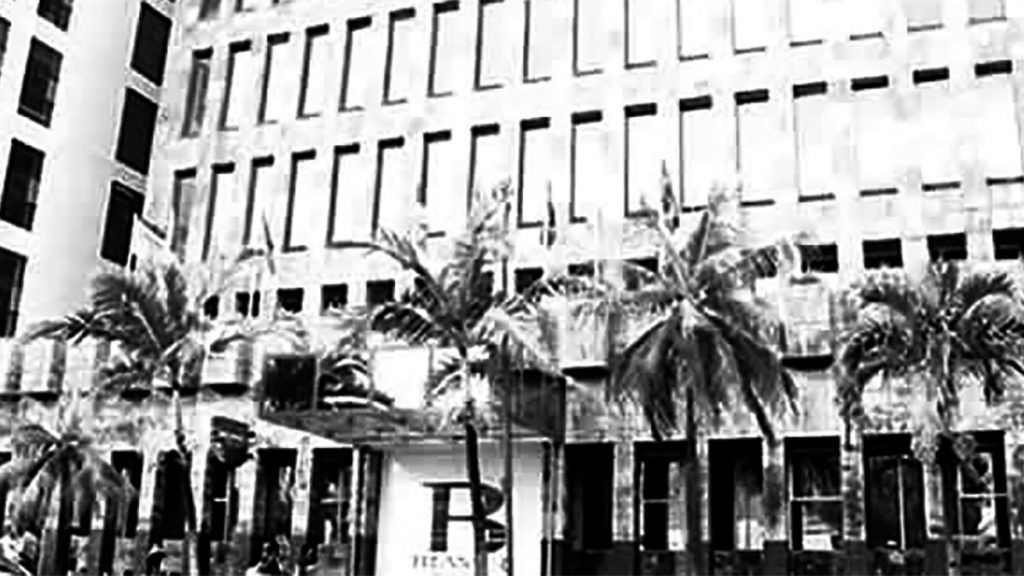 It is over 7 years now, since the Dawood Rawat conglomerate, British American Investment (BAI) Group, was brutally liquidated by a revengeful regime in April 2015 in never-thought-of circumstances… by Harry Booluck, Former Deputy Speaker of the National Assembly.

It is over 7 years now, since the Dawood Rawat conglomerate, British American Investment (BAI) Group, was brutally liquidated by a revengeful regime in April 2015 in never-thought-of circumstances. Over the years since its creation, the British American Insurance grew to become the mammoth conglomerate that is said to have employed some 4,000 nationals and had become the envy of long time competitors. Its local standard bearers were the Bramer Bank ( acquired from a Malaysian-owned bank) to which the conglomerate was financially linked, the British American Insurance (a flourishing Insurance business), Western Union (money changer and international money transfer business), Courts Mammouth ( a household name in consumer retail) , Iframac ( a prime car dealership) and the high-tech Apollo-Bramwell Hospital (a reference in the Indian Ocean). But with the coming of the new regime in 2014, the days of BAI were numbered. Insiders have now revealed that some newly appointed ministers had already been plotting to destroy the BAI Empire…an act of ‘’malice aforethought’’?

Dawood Rawat had since long been regarded as the new regime’s arch ‘’enemy’’: as the Labour Party financier, something he vehemently denies, claiming he financed other political parties as well during elections. He even gave a detailed account of the number of cheques he issued to the then President of the MSM and the sum total disbursed. It was then even alleged that a lion share of that donation was not handed to the party leader, who collected only peanuts. It can be argued that Dawood’s woes with the regime began when the funds landed in the wrong pockets through no fault of his. For the regime, the best way to starve Labour Party financially was to close the BAI tap for good. The BAI was labelled a Ponzi-scheme designed to rip the investors. It was compared to a Caribbean company with similar name that had collapsed with the investors losing their deposits. It had to be closed. Period.

The Sequence of Events

How did the massacre take place? The plotters did not go to the source of the problem, which was alleged to be an insurance-linked High Yielding investment scheme called Super Cash Gold, deemed to be a Ponzi Scheme at the Insurance Company, and therefore under the regulation of the Financial Services Commission. But they went directly after the bank, which fell under the control of another institution, the Bank of Mauritius. The aim was to pull the rug under the financial base of the conglomerate, with which the insurance company was organically linked. First, they pulled out not just their personal savings from the bank, but they also caused public sector institutions to do same, knowing very well that such withdrawals would cause an immediate liquidity problem for the bank. Faced with this problem of insider run on Bramer Bank, the Governor of the Bank of Mauritius instructed the bank to make good the deficiency within a reasonable time frame. The Governor must have endured enormous pressure to go back on his words and revoke the bank’s licence, well before the deadline he had agreed, unusually late in the dark of the night. It is worth noting that Dawood Rawat said that he had in the meantime, made arrangements with Britam (Kenya) to make good that deficiency, but the decision was already taken to revoke the banking licence there and then. With the collapse of the bank began the collapse of the conglomerate and the woes of Rawat, the employees and the multitudes of investors.

First, all the investors of the various BAI schemes were in disarray. They had nowhere to go to find out the fate of their investments, with all BAI offices closed. The government announced that all the investors would be paid back and that no tax payers’ money would be used for that reimbursement. Why then should there be such a reimbursement by the government, when it was talking of a fraudulent Ponzi scheme by BAI, and why close both the bank and the insurer of BAI Group if they held enough assets and money to pay back the investors without having to resort to Government money? Nobody asked the question. But in the meantime, the shock of the sudden closure of the financial conglomerate caused the deaths and atrocious agony of a few investors who lost all their life savings and lump sums.

The government then set up the National Property Fund Limited (NPFL) to take over the properties of BAI for disposal in order to repay investors. However, there was one caveat: the beneficiaries would have to forgo 30% of their original sum invested. Needless to say, all accepted the proposal under duress, arguing that something today was better than nothing tomorrow. Unfortunately, payment at NPFL was not that easy in the face of the wrath of the investors. At the end of the day, it is reported that many of the investors received some 70% of their original investments, while some have passed away or are still waiting for their cases to be processed as they have to prove the source of the funds invested, after 7 years. The dismantling of the BAI has cost the government an astounding sum of some Rs 21 billion of tax-payers money and still counting, as administrators, lawyers and accountants charged their pound of flesh too.

Second, while many of the BAI employees have been redeployed to the subsidiaries of the liquidated BAI Group, like National Insurance Company, the Wellkin Hospital, Courts Mamouth, Iframac and the MauBank, which is a merger between MPCB and Bramer Bank, others were simply laid off. But the Rawats’ woes were not over. The predators were now after his assets. An emissary well connected to the Rawat Empire, now in the good books of the regime, was despatched to call on Dawood Rawat in his Paris residence to find out from the horse’s mouth the amount of all the group’s assets and exact locations as they were under an audit trail. The recording of the discussion, which was taped by Dawood Rawat, soon went viral through the social media: the emissary was caught arrogantly phoning his “boss” to inform him of the deal that he had brokered, insisting that it was the best that could be struck in the circumstances. He also volunteered to drop the next day at the mansion of the boss for further explanation, according to the widely circulated recording. Such was the power they wielded over the situation.

In the meantime, some of the assets were liquidated, with the principal beneficiaries being close protégés of the regime. Expensive vintage cars from the Iframac showroom were sold for peanuts: some 43 such cars were liquidated for Rs6m, bought by a birthday party organiser. Worse was the fate of the Apollo Hospital as the administrators could not decide what to do, dilly-dallying for months. Eventually, it went to an arch-rival group paying an annual rental of Rs60m for an asset worth over Rs2.5billion. Similarly, another asset, Britam Kenya, was sold in strange circumstances to pay the BAI investors. Government itself had to institute a Commission of inquiry to shed light on the transaction, as it was not clear why the price obtained was lower than the price offered.

To further aggravate Dawood Rawat’s woes, the BAI Scandal was referred to Interpol and the US Administration for a thorough international investigation with a view to finding out where he had hidden his wealth from the alleged Ponzi Scheme. But both reported that BAI was not a Ponzi and removed it from their Watch List, allegedly claiming political motivation behind the liquidation of the empire. Moreover, the perpetrators of the liquidation appointed N’Tan, a Singapore-based investigation team, to further inquire on the BAI Ponzi allegation. The investigation reported that BAI ‘’looked like a Ponzi’’ but was never one.

Today Dawood Rawat is suing the authorities for USD 1b as compensation for the prejudice suffered. Irrespective of the outcome of the case, one thing stands out clearly: the government shattered the life of a successful entrepreneur, ‘’un fils du sol’’, who climbed the social ladder to become an iconic competitor of the long-established sugar barons, not because of any crime committed and proven, but because he was allegedly financing the political opponent challenging the MSM. As a businessman Dawood Rawat made donations to political parties that stood a chance of participating in government, believing in the American Jewish doctrine that whichever party comes to power, his interests would always be safeguarded. Unfortunately, that doctrine did not work for him, as those whom he has fed were the ones who bite his hand and more.

What Implications for Mauritius?

The impact of the dismantling of the BAI Conglomerate (and the Betamax in similar circumstances) can now be assessed. It sent shock waves in the business community locally and globally. Business people should now think twice before making a donation to a political party, because they run the risk of being identified by a rival party coming to power, and then suffer the same treatment as the above mentioned. Foreign investors who are often harassed by “courtiers” to call on the PMO or other high places are now aware that all their investments may face the same callous liquidation at the whim of a vengeful government.

By dismantling BAI and Betamax, the perpetrators should now realise their rashful blunder. How much all this is likely to cost the tax-payers? Betamax has already been paid nearly Rs6 billion in compensation of damages suffered and Dawood Rawat’s USD 1 billion is still in the pipeline. The harm they caused to the business owners, the staff, the investors, and the country’s reputation as investment-friendly business centre entrenched in the rule of law is unmeasurable. At the end of the day, the taxpayers will bear the brunt of these spiteful decisions of a government that is bent on revenge. The coming day of reckoning does not seem to deter their rampage on further conglomerates and institutions of the country, if only we watch the saga continuing at Air Mauritius and Bank of Mauritius. Cry, my beloved country!