Vimi Appadoo: “The female representation in the workforce is extremely disappointing” 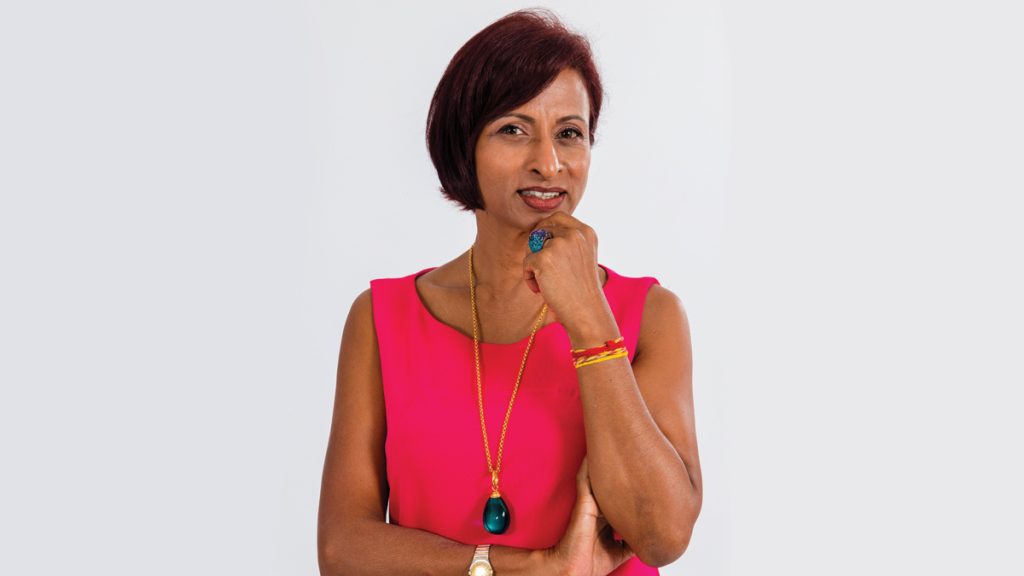 When she took over for the Mauritian Franchise of Dale Carnegie’s leadership training, Vimi Appadoo vowed to help and mentor professionals in Mauritius and enhance their skills and performances. Since then, many milestones have been reached, but she is also using her platform to shed some light on the gender inequality in the workforce and empower women to take on more leadership roles. In this interview, she talks about her achievements, barriers she encountered as a woman in the business world, and ways to reduce the gap between men and women in the work environment.

Since you’ve taken over at Dale Carnegie in Mauritius, what are some of the accomplishments you are proud of?

An accomplishment, for me, is a successful trip outside my comfort zone. Based on that, I would qualify my current career path as a huge accomplishment because it always pushes me to be creative and adopt an open mind. Some major ones, that still resonates with me, are my qualifications as a Master Trainer, the reputation that we have built for ourselves on the local market as a strategic partner that can add measurable results to any business and the amazing results that the team achieved within 5 years of me taking the Mauritian Franchise of Dale Carnegie. These results pushed us amongst the Top 5 on global podiums!

What do you like most about being a mentor for so many people?

I would say enabling them to have an easier, swift, and exciting journey so that they can, in turn, be excellent Mentors to their environment. In a way, it’s like leaving a legacy…

As a woman leading an international institution like Dale Carnegie, what has been the most significant barrier in your career?

Without any doubt, it would be getting the business world to accept me as a Thought Leader in my field of expertise, especially as I was taking over from a foreigner. Being a woman probably delayed that process.

Could you name one leadership lesson that helped you and is only applied to female leaders?

Thank you for this question! My 20-odd years of interacting with women at different levels in the corporate or entrepreneurial arena would lead me to say that, as women, we tend to want to replicate behaviours and actions, and at times even demeanours, of men leaders. And I see that as a huge and uncalled for compromise with our values, uniqueness and beliefs.

So, my advice to women would be : work on your own Self-Acceptance and Self-Belief to develop the Self-Confidence to be the female Leader that will inspire ANYONE.

There have been many talks lately about female representation in the workforce in Mauritius. As an expert in your field, how would you rate it?

I have to say that the female representation in the workforce is extremely disappointing. Even more so, when there is strong evidence based on global research proving the positive impact of more women in the workplace.

Is there a way to reduce this gap between Men and Women?

During the Women Leadership Academy that we are running in collaboration with the MIoD, we interacted with more than 75 women. From their perspective, the root cause is Corporate Culture. When Companies or a Government make it their priority to have more women in the workforce, they also work relentlessly in creating the right ecosystem to make it work. All things being equal, we are planning for some experts in this field to enlighten us on the current global practices. So watch our space!

In this pandemic era, how did Dale Carnegie in Mauritius adapt to the changes?

Being a global organisation, the global network was quick to help each other prepare, cope, and be proactive. For instance, since January 2020, our colleagues in China were already “in it” whilst we were still speculating about it in Mauritius. Our Head Office in New York was already sharing best practices/advice and new procedures to address the issue if it gets to us. A concrete example was the certification of all Dale Carnegie Trainers for delivery of Live Online Sessions, and the translation/conversation of our contents to Live Online was already in place since then. Bearing in mind that Dale Carnegie Training has been delivering live online training for more than 10 years already.

Having said that, like everyone else, we had to undergo the mindset shift and build resilience, but following the time-tested principles of Dale Carnegie helped us make a swift and smooth transition, for example the very 1st one “DON’T CRITICIZE, CONDEMN or COMPLAIN” forces one to shift into “understanding” and “analysing”.

Did you notice an uprise in demand for courses? What were the most popular ones during these two years?

Given the sudden move from working from office to work from anywhere – with all the personal challenges that it entailed – we initially saw a desperate need to give employees the techniques on how to strike “WORK-LIFE BALANCE” – what in Dale Carnegie we call “WORK-LIFE INTEGRATION”. Notwithstanding the challenges that people were facing with virtual interactions – being an organisation concerned about the well-being of our future leaders – we volunteered to deliver pro-bono sessions for the educators of the Ministry of Education. In April/May 2020, more than 350 educators got the opportunity to follow these sessions. This was also a challenge (and still is in some cases) for leaders in the corporate world.

Then as the situation persisted with a deepened lack of clarity, employees’ level of stress and worry soared. We were then solicited to support that. Since last year, we have seen a drop in motivation and performance level as the lack (or inexistence) of valuable team communication/interaction starts to impact team performance.

In 2021, the focus was on Leadership and Sales Excellence. And for 2022, we have exciting strategic collaborations underway with prestigious organisations like MIoD, Oracle, Women in Finance and Investment and some foreign subject matter experts in the field of Organisation Culture, Agile Leadership, and Peernovation.