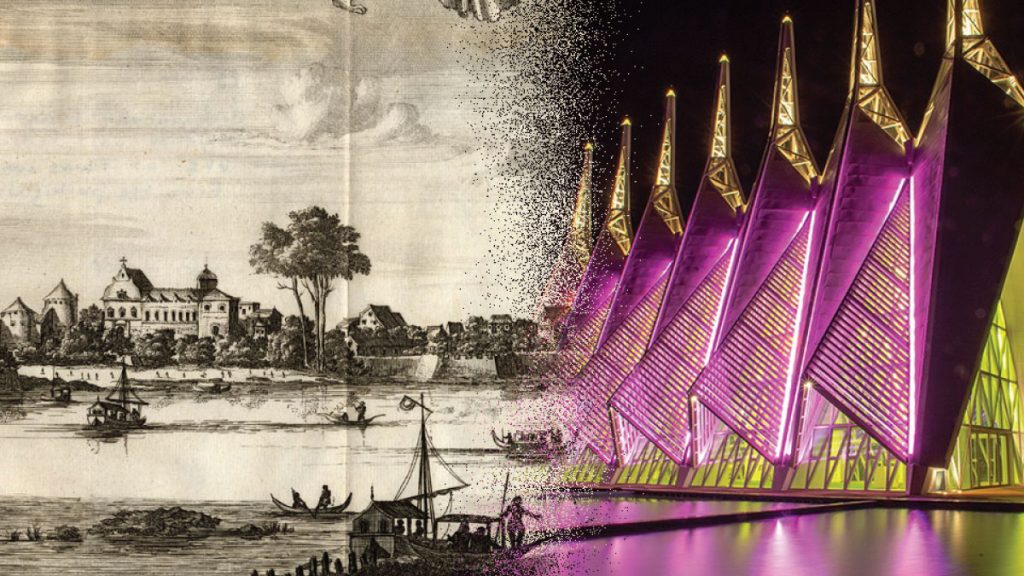 Sitting on the Maritime Silk Route, where Arab merchants bought Chinese porcelain apart from Indian spices and fine muslins to sell to European buyers in the profitable bazaars of the Middle East, the ancient city of Muziris, dominated oceanic trade between 1000 BC and 1341.

An unexpected flooding of the Periyar river is blamed for its complete destruction. In time, Muziris also disappeared from public memory.

Its place was taken by Calicut, an adjacent port on the Malabar coast, where the Portuguese, Dutch and finally the British, arrived to set up their trading base.

Vasco Da Gama is often credited with the discovery of oceanic route to Asia via the Cape of Good Hope, thereby joining the East and West …and the beginning of European imperialism. But little recognition is given to the fact that sea-faring communities from Asia had reached the Atlantic Ocean several centuries before that, settling in places such as Madagascar on the way.

These communities are known to have visited Mauritius and adjacent islands on their numerous voyages.

Yet, an uninhabited island like Mauritius would serve no purpose other than providing a resting place for wayward ships and a hideout for Arab pirates operating in the Indian Ocean.

The Dutch also found no particular use of Mauritius even as they tried growing sugarcane and lumbering ebony for export, before giving up completely.

The first real settlement actually began in the early eighteenth century when the French East Indian Company started using Mauritius as a strategic location from where to manage their Indian trading posts in Chandernagore, Pondicherry, Masulipatnam and Surat.

India of the fifteenth century produced a quarter of the world GDP. The country had accumulated so much precious metal from external trade that its temples and palaces glistened from gold claddings. Its port cities exhibited opulence, extravagance and inestimable wealth. Jews, Romans, Phoenicians, Chinese and Arab merchants brought themselves and their unique language, culture and religion and gave Muziris a uniquely cosmopolitan life.

French took control of Mauritius in 1715 under Guillaume Dufresne d’Arsel, yet it was under Mahé de La Bourdonnais who became governor in 1735 that economic expansion began. Port Louis emerged as an important commercial centre. Sugar production increased with the import of slaves from Madagascar and Mozambique and artisans from the French colonies in South India.

By the time the British obtained sovereignty over the Island from the French in 1810, the slave population had reached 60,000.

It was during British rule that the influence of India on Mauritius started to be felt.

Firstly, Indian indentured labor began to replace freed slaves – between 1835 and 1924 which further expanded sugar production. More than 450,000 would find employment in the Mauritius sugar estates making up approximately half of the island’s population.

Secondly, India served as a market for Mauritian sugar at difficult times. In 1863 Bombay state, for instance, imported 10,000 tons of sugar from Mauritius. Indian traders exported large quantities of rice, flour etc. to feed a growing population in return.

Such was the size of bilateral trade that the Indian rupee became the official currency of Mauritius from 1876 to 1934.

In modern times, the Double Taxation Avoidance Agreement, DTAA signed in 1982, added to the economic growth, as foreign companies investing into India, chose their legal domicile in Mauritius; creating thousands of highly paid jobs in the process and kickstarting the financial services sector.

Since 2000, it is estimated that over 40% of the Foreign Direct Investment into India (roughly US$90B) passed through Mauritius.

Apart from its impact on economy, India has played a significant role in shaping the social, political and cultural institutions of Mauritius – which is still visible in the working of several socio-cultural organizations and numerous political parties.

The latest step in furthering this unique and special relationship is the Comprehensive Economic Cooperation and Partnership Agreement also known as CECPA, signed in April 2021.

An outcome of several years of effort, CECPA spread over 400 pages, is an agreement that envisages a veritable Free Trade Area between Mauritius and India. It also aspires to put Mauritius back at the center of the India Africa economic corridor, reminiscent of the pre-colonial times.

But is CECPA a game-changer?

There is no short answer. The long answer requires looking at the rearview mirror to understand the past. It also requires predicting the nature of a hugely altered post-Covid future world. And obviously challenging many of the observations and assumptions that CECPA makes!

Some analysts question the sluggish pace of bilateral trade (around US$300m in 2020 if you discount for one-off petroleum purchase).

China has deepened its relationship with Mauritius in other ways as well. The new smart city of Jin Fei – presently under construction in the north of the Island promises to be a hub for Chinese manufacturers, traders and entrepreneurs doing business with Africa.

Indian public sector corporations have done better by that standard. LIC, SBI, Bank of Baroda, TCIL, New India Assurance and Indian Oil are long-standing players in the local economy. The experience of private sector companies has been mixed – few have performed well, such as Amity, Ajanta Pharma. Oberoi and Agarwal Eye Hospital; rest have struggled.

This is not unusual given the nature of the Mauritian economy. Local businessmen control supply chains and influence demand. Chinese corner shops until the mid-twentieth century, that distributed goods imported by Muslim merchants from India have been replaced by Supermarkets. Multinational brands now dominate the consumer market as disposable incomes increase.

On manufacturing though, it is intriguing that the success of Ajanta Pharma has not generated similar interest amongst other pharmaceutical majors from India.

Will CECPA convert this trickle into a gusher?

We should wait to see. Business facilitation is an integral part of the agreement, and any bottlenecks could be dealt with on a bilateral basis – through the instrument of Joint Trade Committee, for instance, provided for exactly those purposes.

More success could be expected in the services sector, though, accounting for 75% of the Mauritian GDP. This is also true of the Indian economy, where services contribute more than 50% to the Gross Value Added. Collaboration in the service sector could be beneficial to both countries. The performance of recently launched AfriNex – a listing and trading platform jointly promoted by local institutions and the Bombay Stock Exchange would provide some direction.

Can Mauritius offer itself as a flexible and forward-looking platform for innovations and experiments in 3D Manufacturing, Artificial Intelligence, Digital Currencies, Social Commerce and Green Energy etc?

Singapore has done that consistently. It has been incubating high-tech ventures through friendly regulations, business facilitation and institutional support for the last two decades. By subsequently farming them out to large markets across the borders into China, Indonesia and India, it has generated huge wealth for the country.

Take the case of Grab – a ride-hailing service that started in Malaysia but moved its headquarters to Singapore soon after in 2012 . It is now valued at US$40B – roughly four times the size of Mauritian GDP.

Naspers – the South African media conglomerate, is heavily invested in the Indian tech space backing the most successful startups such as Flipkart and Byju’s with present valuations in excess of US$60B.

There are several ways in which Mauritius could facilitate such cross-border funding and investment between India and Africa. Attracting Indian Investment Bankers and Fund Manager who presently operate out of Singapore and London with some kind of dual citizenship or Golden Visas is one way. A vibrant financial services sector could incentivize entrepreneurs in the region to locate their regional headquarters or back-office operations in Mauritius.

At one level, the CECPA could help Mauritius attract Indian manufacturers of high-end products such as medical devices for exports to Africa benefiting from its membership of regional free trade areas viz, the Southern African Development Community, SADC and COMESA, the Common Market for Eastern and Southern Africa but also the AfCFTA ( African Continental Free Trade Area) launched recently in Jan 2021.

At another level, it could be instrumental in attracting African corporations desirous of benefiting from preferential access to the large and fast-growing Indian consumer market.

To note, more specifically, under CECPA, India has allowed preferred market access to 615 Mauritian products such as sugar, alcohol, garments, tuna, medical devices, noodles, soaps and detergents etc. Mauritius, on the other hand, has agreed to provide preferential access on 310 products such as spices, tea, plastic articles, wooden furniture, amongst others. Many of those could use third-party inputs – including from China and Europe as long as they meet the Rules of Origin.

As regards trade in services, India has allowed market access across 94 service lines, including professional services which could be delivered out of Mauritius – benefiting from lower domestic taxes. It helps that CECPA allows for mutual recognition of qualifications. Firms engaged in architecture, engineering, medical, dental, accounting and auditing, nursing, veterinary and company secretarial etc, should benefit.

CECPA’s deeper impact could be imagined through other provisions buried deep in the text – such as in freer movement of skilled workers and professionals between each other’s territories.

One notable area of cooperation relates to “Technical Barriers to Trade” and “Trade Remedies”, where “mutual equivalence agreements” that allows standards ( manufacturing, regulatory and procedural) to be accepted by both parties. This could reduce costs for Indian goods entering Mauritius and vice versa. For African enterprises establishing manufacturing bases in Mauritius for export to India, this could be a source of major competitive advantage.

Today, India and Africa together represent an annual US$4.5 billion in consumer spending. With a combined population of 2.5 billion, which is both young and growing, the world has set its eyes on India and Africa as regions for all future growth.

An effective CECPA can deliver rich dividends to Mauritius. It could also help revitalize the long-standing relationship between India and Africa as it attracts global investments and further facilitates economic activity.